This new Valorant balance update may affect your favourite Agents 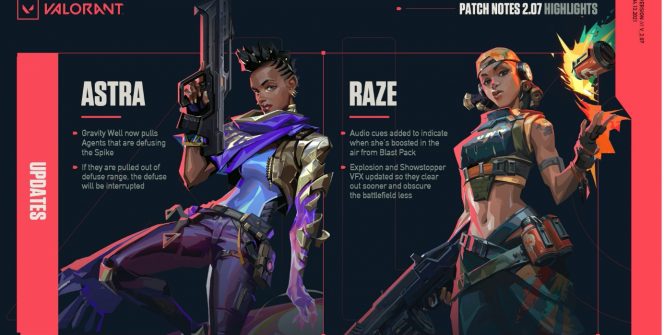 The day of reckoning for fans of Astra and Raze has come, with Riot Games dropping their key balance updates in patch 2.07. Designed to uphold the knife-edge competitive level playing field in this hugely popular tactical shooter, this new Valorant update may catch some experienced player out if they’re not acutely aware of the balance patch: and knowledge of what’s changed may give you the edge in a match.

The first agent affected by this update is the brilliant Astra. According to the developers, the Ghanaian Agent harnesses the energies of the cosmos to reshape battlefields to her whim. Her basic abilities include:

Astra’s abilities are great for ambushes and distraction, and that’s no different when it comes to her Ultimate ability: Cosmic Divide. Astra players can select a part of the map to create a tall and imposing wall that splits the environment from end to end, going all the way up to the skybox. This wall blocks bullets and most special abilities.

Where Riot Games have tweaked Astra is with that Gravity Well ability. Now, activating Gravity Well near a player defusing a spike will suck them into the vortex created and if the player is pulled out of the spike range, the defuse stops. This makes Gravity Well a great last-minute defence against a defuse.

We want to try and keep our ability interactions as consistent and easy to learn as possible and allow you to explore ways to leverage Agent abilities without running into unexpected walls. We think this update can create some interesting interactions post plant where enemies try to bait out the Gravity Well and play around its cooldown.

The second change comes with Raze, the Duellist Agent. Raze’s playstyle is very aggressive compared to many of the other agents, with a heavy focus being made towards damage and agility. That’s why Riot have chosen to make her breakneck mobility abilities a little more noticeable to potential victims on the Valorant battlefield.

Her basic abilities include:

Raze’s ultimate ability Showstopper allows the player to launch a rocket that explodes on contact, dealing serious damage to enemies caught in its blast radius.

A mostly unintentional result of the Blast Pack is that, as Riot have put it, “Raze mains have learned to fly!”. Now it’s not uncommon to hear an explosion in the distance from a Blast Pack and then get surprise aerial swiped by a Raze. A balance update here adds audio cues when Raze gets boosted in the air by a cleverly positioned Blast Pack, allowing other players to better track her movements.

The other change made to Raze is toning down the particle effects associated with the Showstopper and Raze’s explosions, making them less obscuring and reduce the amount of time the effects linger. Raze’s abilities are first and foremost aggressive, damage orientated affairs and so having the Showstopper obscure combat violated the key essence – and flaws – of using this Agent.

Let’s get a leg-up

If you’ve taken some time away from Valorant, or if you’re new to the game and want to be able to access better Agents, greater abilities and show off to your friends, there’s nothing wrong to turning to a bit of boosting to get you levelled up. Or even if you’re tired of Valorant, consider checking out Gamecamp where you can find deals on other video games for you to try out.

Otherwise, there are options that offers affordable Valorant rank boosting with offers tailor made to your current situation and how fast you want the boost. Simply input your current rank and you desired rank and multiple service providers will give you detailed quotes so you can pick exactly the kind of service you want. Or you can skip the whole process and purchase already boosted Valorant account and start playing the game with a head start.

Allow the professionals to help you skip the grind, so you have more time to play with your favorite Agents and show off to your friends.