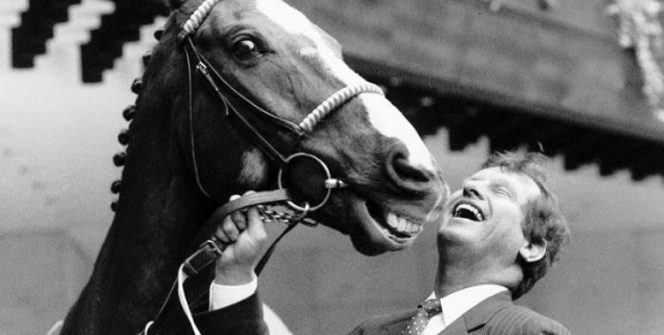 Moving tributes went out to Nick Embiricos after the owner of the famous 1981 Grand National winner Aldaniti, and driving force behind the Bob Champion Cancer Trust, died recently aged 81.

Embiricos showed tremendous patience to Aldaniti and Bob Champion, who both overcame life-threatening problems to win the world’s greatest steeplechase in 1981.

It was their greatest triumph, won very much against the odds. The jockey was recovering from cancer while the horse had suffered a significant injury and neither were considered serious contenders that year.

After that fairytale triumph, Embiricos set up the Bob Champion Cancer Trust, dedicated to the research and treatment of testicular and prostate cancer, and was chairman of the charity for many years.

“When I was stable jockey to Josh Gifford, Nick and his wife Valda always had some nice horses there and I was very fortunate to ride a lot of winners for them and then, of course, Aldaniti came along and won the National. It was always Nick’s dream to win it,” Champion said in his tribute to the man.

“They were just the most lovely owners and lovely, easy people to ride for. The horses always, always came first with them and they were fantastic people to deal with. They were a lot of fun too.

“Nick was one of the people who really wanted the charity and really wanted it to succeed. He was instrumental in getting it going. After the National a lot of people sent donations to the Royal Marsden Hospital care of myself, and Nick wanted to do more and make more of it all and it’s grown from something little to what it is today, which is quite big. He put his heart and soul into it.”

The charity received generous donations following the jockey’s remarkable recovery from cancer that enabled him to return to the saddle and win the Grand National on the injury-plagued Aldaniti, who was trained by Josh Gifford.

“Nick and his wife Velda were fantastic owners. I rode some really nice horses for them over the years. Most of all, the horse had to come first, which was nice. Their horses were given masses of time to recover,” added Champion.

“Aldaniti had a load of ability, but he had so many problems. When he broke down the last time the vets did say put him down, but Nick and Valda said ‘no way’. I had said I thought he’d win a National one day.

“They were terrific with him. He was in a stable for six months in plaster and he had to be a terrific patient. And they did all the road work before he went back into training. They always use to have their horses at home for the summer and they did a fantastic job.

“Nick was instrumental in my cancer trust. When I won the National, people sent their winnings to the Royal Marsden Hospital.”

Aldaniti very nearly did not make it past the first fence in the 1981 National, landing too steeply and buckling at the knees. But Champion held on and the pair completed one of the most popular successes in the history of the race.