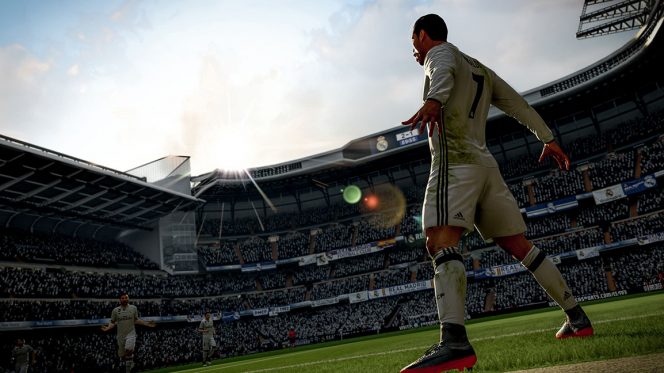 Football enthusiasts will love FIFA 18, which builds on everything that made FIFA 17 such a fun gaming experience. With a refined story mode and impressive player models, FIFA 18 delivers one of the best overall packages of any FIFA game so far.

The game’s story mode includes brief encounters with star players such as Rio Ferdinand and Cristiano Ronaldo, both of whom pop up relatively early in the main story. The story also covers some of the top clubs, with everything from transfer rumours to exciting matches.

Beyond the single player story, FIFA 18 delivers the same football fun fans have come to expect from the series. The controls are intuitive and simple, letting newbies quickly learn the game and experts master even the most complicated plays and maneuvers.

FIFA 18 is easily the most detailed FIFA game so far. The players are rendered in flawless detail and look almost exactly like their real-life counterparts. The stadiums are accurate and feel as if they’re full of life, with cheering fans that respond in real time to the on-field action.

Football enthusiasts seeking an ultra-realistic gaming experience will find plenty to dislike about FIFA 18, or FIFA games in general. The gameplay is clearly designed to prioritise excitement in place of realism, resulting in lots of scoring and a game that’s clearly built around attacking.

In short, FIFA 18 improves almost every aspect of its predecessors, delivering a fun, engaging football game that’s exciting to play and enjoyable to watch. Just don’t expect total realism as you score your fifth goal of the match before halftime.