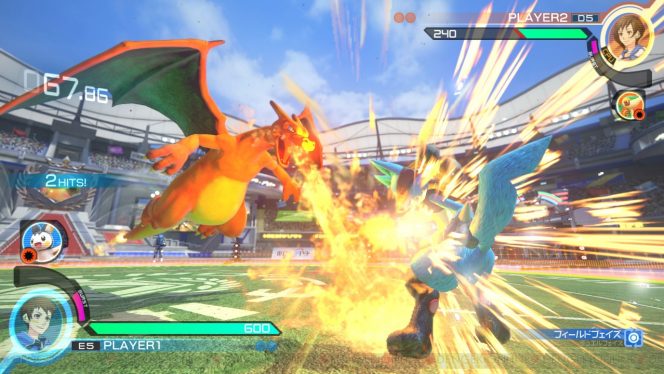 Pokken Tournament DX puts you in control of more than 20 Pokémon for a Tekken-style fighting tournament. Originally released for the Wii U last year, the Switch version adds extra Pokémon and a variety of new game modes, as well as the ability to play while on the go.

As you might expect from the name, Pokken Tournament DX combines the character roster of Pokémon with the fighting gameplay of Tekken. From Pikachu and Mewtwo to Machamp and Scizor, you can take control of a variety of Pokémon for intense one-on-one combat.

Each Pokémon offers a unique move set, letting you pit electric types against water, fire against ice and so on. The fighting gameplay is complex and demanding, with a level of depth that puts Pokken Tournament DX up there with today’s most sophisticated fighting games.

Of course, with hundreds of Pokémon to choose from, Bandai Namco obviously couldn’t feature every Pokémon in Pokken Tournament DX. The 21-character roster includes a good mix of fan favourites (yes, you can of course play as Pikachu) with a few lesser-known Pokémon.

Pokken Tournament DX is split between a single-player tournament mode, which allows players to go up against a variety of AI opponents, and multiplayer gameplay. The single-player mode is fun but slightly underwhelming, as the AI lacks the insight and skill of a real player.

The real gem here, however, is the multiplayer. Like Tekken and Street Fighter, this game is built with parties and competitive gameplay in mind. Few things are as fun as gaining control of your favourite Pokémon and delivering a serious smackdown to a friend or online opponent.

Although its subject matter might be a favourite of children (and nostalgic fans of the Pokémon games of the 1990s), Pokken Tournament DX is a grown up, complex game that offers a huge level of challenge and excitement for gamers.

If you’ve grown tired of Zelda and Mario Kart and need something to tide you over until Super Mario Odyssey arrives next month, Pokken Tournament DX is a worthwhile addition to your Switch gaming collection.