4 Ways to Protect Your Mobile Phone From Theft 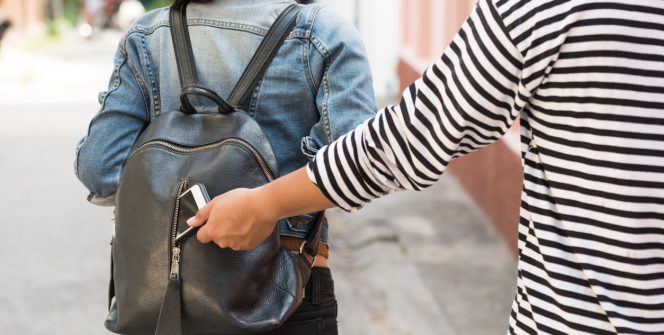 Phone theft is on the rise, with London’s infamous moped gangs resorting to more and more aggressive tactics to get their hands on people’s phones, wallets and watches.

More than 23,000 crimes were recorded in London using motorcycles in 2017, many of which were thefts of smartphones. Long, popular shopping streets have become popular targets for phone and bag thieves, many of whom earn a living reselling phones stolen from the public.

While phone theft is always a threat, there are several tactics you can use to protect yourself from thieves and make your phone less of a target. We’ve listed four strategies below, all of which can help you limit your risk of losing your phone to a moped-based or on-foot thief.

Phone thieves tend to target busy shopping streets, especially areas that have a large number of pedestrians. One of the most effective ways to avoid becoming a target is to avoid using or answering your phone in busy areas.

As the Metropolitan Police suggest, if you need to use your phone in a busy area, make sure you check for mopeds and motorcyclists before you pull it out of your pocket or handbag. It’s also best to turn away from the roadside when you make a call to further reduce your risk.

Many thieves target people who are texting or reading on their phones while they walk. These pedestrians are usually the easiest targets, since they’re engrossed in their phones and often unaware of what’s going on around them.

If you need to send a text message while you’re out and about, try to find a confined, protected space that’s a reasonable distance from the street. Hold your phone close to you and look out for mopeds, motorcyclists and cyclists who could target you.

If possible, it’s always best to walk inside a nearby shop or shopping arcade to send texts and other messages. Although theft can still occur in these areas, you’ll be better protested against most thieves on vehicles.

Protect your phone with a secure PIN or fingerprint

There are two steps to protecting yourself from phone theft. The first is to reduce your risk of becoming a target in the first place. The second is to limit damage that can occur after your phone is stolen, such as identity theft or blackmail.

Many thieves not only make money by stealing and selling smartphones — they also make money by selling your private data to other people. These people often use stolen data for fraudulent purposes, including identity theft.

If your phone has a PIN lock, use it. If your phone has biometric identification tools, such as fingerprint or facial recognition, use them too. This way, you’ll reduce your risk of becoming a victim in the event that your phone is stolen.

Finally, it’s important to make sure you’re financially protected in the event that your phone is stolen.

With a mobile phone insurance policy, you’ll be covered for the cost of your phone if it’s ever snatched by a phone thief. You’ll also be protected against damage and breakdowns, helping you use your phone with confidence.

Although phone insurance isn’t free, it’s cheap enough that it’s easy to justify, especially if you live in an area with lots of petty crime such as a major city. For a small monthly cost, you’ll be fully insured in the event that your phone is stolen, further protecting you against theft.