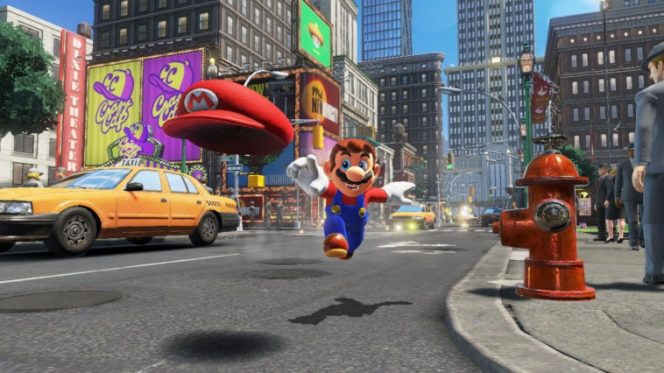 After a seven year absence, Super Mario will make his way back onto a Nintendo home console with the release of Super Mario Odyssey on the Nintendo Switch next month.

The latest Super Mario game is scheduled for release on the 27th of October. Nintendo plans to release the game worldwide, meaning you’ll be able to buy it digitally in the UK on the same day it becomes available in Japan and the United States.

As a side note, can you believe it’s been seven years since the last Super Mario game? Super Mario Galaxy 2 came out in May 2010, with Nintendo declining to release a Super Mario game on their less-than-popular Wii U console.

So, here’s the information we currently have access to about Super Mario Odyssey. It’s coming out on the 27th of October. It’s a Switch exclusive, meaning you won’t be able to play it on your Wii U. Each world within the game is open, giving players a huge degree of freedom.

Mario also makes his way through the game with a new sidekick — his hit. Mario’s hat is now a completely independent item (complete with the nickname Cappy) that can be thrown to take control of enemies and non-player characters.

Cappy also doubles as a springboard for Mario, extending his jump height and letting him reach new, previously inaccessible areas.

Other new features of Super Mario Odyssey include an in-game currency that allows you to buy clothing and accessories for Mario. Since the game is mission-driven, we expect that you could earn rewards for each quest that can be spent in game.

Can’t wait for the new Super Mario game? Unfortunately, there’s still a month to go before it hits the shelves. However, you can pre-order a digital copy today via Amazon and other retailers to access it as soon as it comes online on October 27.