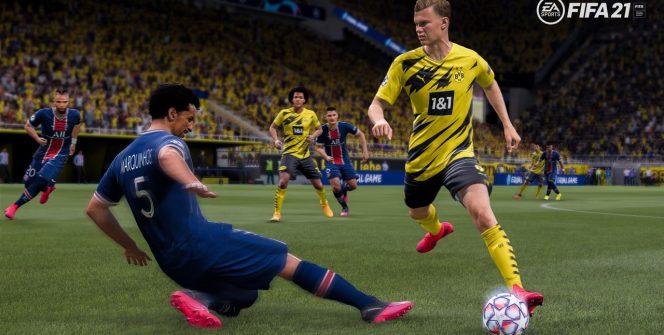 Thanks to cutting edge technology, you no longer have to put on a pair of shorts and boots and head to your closest football pitch to enjoy the world’s most popular sport. As gaming is something that has ingrained itself into society, it got us thinking about how we prefer consuming football nowadays. In this article, we are going to look at whether football fans are choosing FIFA instead of a real game and why this might be the case.

A Look at the Figures

When we take a look at the figures, it is quite clear that football is popular on a console and on the pitch. When FIFA 2021 was released in October 2020, it sold 1.5 million copies across the world, which was 3000,000 more than FIFA 2020 managed in its first month. It has since gone on to sell more than 325 million copies worldwide, and FIFA 2022 will probably go on to surpass that.

As we have shown from the figures about, both forms have a large popularity base, but which is most preferred? Well, a survey asked 1000 gaming and football fans whether they prefer to play football in the park or from the sofa, and we shall now look at the results of the survey.

72% of the people that took part said that they prefer to play football video games than the real thing. This is a really high percentage and one that we would not have expected, but it shows just how much football video games such as Pro Evolution Soccer and FIFA bring to the table.

32% of those who took part declared that they are better at video games than playing the real thing, while 31% said the main allure of football video games is that they are able to play as their favourite players. Video games help us to escape from our reality and gives us the chance to be some of the most idolised footballers in the world. Most of us cannot be like Lionel Messi or Cristiano Ronaldo in real life, but thanks to FIFA, not only can we play like them, we can also be them.

Also, it is easier to play eSports because all you need is the console and the game in order to play, and you can play at whatever time you like, even in the middle of the night. When you want to play real football, you have to find a place to play and people to play with.

FIFA games have become a huge part of the professional eSports scene, which rakes in over half a billion dollars every year. The survey wanted to see whether their respondents respect the professionalism of competitive eSports, so they asked them whether they see professional FIFA eSport tournaments as a real sport, and 56% of them said yes. In fact, 59% of the people that were surveyed want to see eSports as part of the Olympics, and it has been revealed that eSports are being considered for the 2024 Olympics in Paris.

There is plenty of debate as to whether this should happen though because there are many who do not believe that an activity that involves little physical movement can be called a sport. Also, there is debate as to whether the skill that is needed to excel at eSports is equal to the skill needed to be a professional footballer. 49% of the people who were surveyed said that they would consider professional eSports players as athletes, while 35% declared that they appreciate the different set of skills that professional footballer and eSports players have.

Which One Attracts More Bets?

In 2013, the BBC estimated that football fans around the world bet a combined total of $70 billion on football matches. In 2019, that figure had risen to around $100 million, and in 2021 we can safely assume that it has increased even more. Betting on football is easy now thanks to the variety of great football betting sites, such as the ones found at bettingonlinesverige.se, that offer very competitive odds and a wide variety of markets for football betting.

What about eSports? Well, at the time of writing, the eSports industry is worth around $30 billion a year, which, despite being a huge sum of money, is a lot less than what the football betting industry is worth. However, it is safe to say that the eSports gambling industry will drastically increase in worth with each passing year as more sports fans tune into it and start placing bets.

Can Football and eSports Live in Harmony?

Those who took part in the survey agree that football and eSports can work with each other for mutual benefits. West Ham United and Manchester City are two Premier League teams that are embracing eSports. They now hire professional players to represent the club at different eSports events across the world. 61% of those who took part in the survey said that they would like their club to do the same.

Doron Nir, the CEO and co-founder of StreamElements, a streaming platform, believes that pro sports teams will need to embrace eSports if they want to stay one step in front of the curve. Any sporting organisation that is not looking at building their eSports presence is neglecting a major component of their future business. The likes of FIFA have already taken notice of this as can be seen by their eWorld Cup that took place for the first time in 2018. There has been plenty of appetite for such competitions as 69% of those who were surveyed said they would be happy to support a player that represents their country at a FIFA eWorld Cup.

Should we be a bit worried about the increasing interest in eSports? Will it eventually drive people away from the football field? Will that have a negative impact on health? After all, there were 22% of the respondents between the ages of 18 and 23 that declared that they much preferred to play video games since playing actual football is tiring. We do not think there is anything to worry about. Just because someone enjoys playing video games does not mean that they will not enjoy playing sports, just like playing sports does not mean that athletes do not enjoy playing video games.  Also, it is safe to say that people will not stop betting on either any time in the near future.