How the Las Vegas Strip came to be 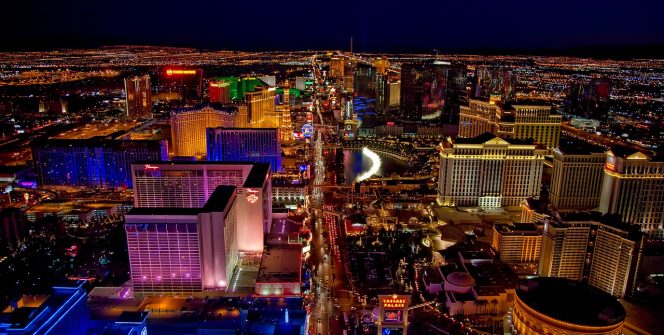 The Las Vegas Strip is famous for its many luxury casino resorts, the bright lights and flashy Hollywood lifestyle. Back in 1905, Las Vegas was unrecognisable in comparison to the glamourous city we know today. It was a dusty and undeveloped space, with spring-fed water and the Union Pacific Railroad passing through. In fact, Las Vegas translates to “the Meadows” in Spanish, and was frequently used as a place for passers-by to refuel and rest – a far cry from the busy streets we know today.

Join us as we take a trip back in time to the birth of the Las Vegas Strip, to see exactly how Sin City came to be…

In 1931, construction began on the Hoover Dam – originally known as the Boulder Dam – drawing thousands of workers to the East of the city. This was the very same year that gambling was legalised in casinos. Before this, gambling was outlawed in Nevada from 1910, causing speakeasies and underground casinos to host the games. With the lack of regulation, the city became renowned for organised crime.

The legalisation of gambling

The workers bought to the city by the Hoover Dam were lucky enough to witness the very first casinos in Las Vegas, where gaming establishments and showgirl venues began to open up on Fremont Street – the town’s only paved road. When works on the dam were completed in 1936, cheap hydroelectricity was used to power the first flashing signs, drawing in customers.

In 1941 the El Rancho Vegas resort opened just outside the city. Other hotel-casinos followed suit, and this popular section of the highway quickly became known as The Strip. In 1946, famous mobster Bugsy Siegel opened the Flamingo, one of the longest surviving casino resorts on The Strip – encapsulating the Hollywood lifestyle in the glitz and glamour of the establishment. Despite being murdered in 1947, Siegel’s vision for The Strip has lived on, with mobsters helping to build many more of Sin City’s iconic casinos.

In the modern day, however, Las Vegas has no roots left within mobster soil, as over time the casinos have changed hands and been bought out by billionaires or hotel-casino chains.

As The Las Vegas Strip began to find its feet, people would travel far and wide to see the entertainment the resorts offered, with artists such as Elvis Presley and Marilyn Monroe becoming frequent visitors to the glamourous scene.

In 1989, casino developer Steve Wynn opened the Mirage – the city’s first mega-resort, pioneering the next changes of The Strip over the coming years. Older casinos were destroyed to make room for massive complexes designed to transport you to some of the most glamourous locations for a truly luxurious escape.

A taste of the glamour online

Today, there are 144 casinos in Las Vegas, each unique and many spanning over acres of land, with pools, spas, golf courses and shopping centres adding to the ultimate experience.

If a plane ticket seems like a bit of a far cry, you can always enjoy the fast-paced luxuries of The Strip at an online casino, where endless casino games are available right at the tip of your fingers. From the classic Blackjack and Roulette tables, to slot machines you won’t find anywhere else – the bright lights, animations and state-of-the-art gameplay are sure to transport you right into the centre of the Hollywood glamour of the Las Vegas Strip.