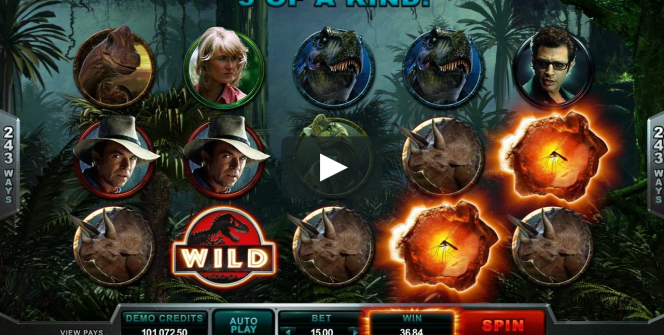 It was in 1993 when the world first heard the thunderous roar of the dinosaurs! The feel was magical, and its success reverberated throughout the world with the same power. Steven Spielberg and the Universal Pictures brought out this franchise of a cloned-theme park dedicated to dinosaurs. This Jurassic Park came up with sequels too, and each of them got such massive appreciation that the game developer came up with the slot game versions too.

Based on the masterpiece sci-fi by Michael Crichton, Jurassic Park is perhaps one of the most iconic movies in the world. The way it sent across ripples, and the T-Rex (Tyrannosaurus) caused euphoria, is still unbelievable. The franchise became an instant hit in every pop culture, spurring a rise in the sale of merch, and even causing amusement parks to have robotic dinos spring up overnight around the world. It is only justifiable if such a magnum opus like Jurassic Park gets a spell-binding and equally superior treatment even as a slot game. This is what we shall now talk about in discussion.

An Introduction to the Jurassic Park Slot

The slot game of Jurassic Park came up much later in 2014. The film starred Laura Dern and Sam Neill, along with Jeff Goldblum and Richard Attenborough. However, the slot game has recreated the magic of the movie with these dinos and included the free spins and more features. The 5-reel slot gets 243 ways to win is made by Microgaming and has been fetching much attention ever since its launch.

What makes the Jurassic Park slot game so famous? To understand that, we will talk about the game theme that is close to the film franchise. The game stays true to the original Spielberg movie. What the creators of this game do is to use the Parallax Scrolling effect whereby the gaming experience amplifies manifold. You feel the images in the foreground move at a different speed from the background images. This creates a spell-binding experience and draws you into the dense forest. The dense foliage stirs as a vicious-looking prehistoric dinosaur peep from behind a tree and leaps in front of you.

You can play Jurassic Park slots at OLBG-recommended casinos, including Netbet. The first thing to know about playing this game is, the coin range is between 0.30 and 15 coins. The total coins for every spin are 30. The bright amber spot is a Scatter symbol, and the Logo of Jurassic Park is a wild.

This wild can substitute with all the other symbols except the scatter.

The amber is a scatter and get 3, 4, or 5 of it to trigger a maximum of 25 free spins. Along with that, the symbol also pays when you get 5 in a row. There is a payout of 300 coins in that case. Moreover, there are different rewards to earn during the free spins feature like wild multipliers, mystery multipliers, and you name it!

Look out for the T-Rex Alert mode. This will be the time when you can get as many as 35 extra wilds. This will happen on six spins back to back! Just calculate the payout you can earn thanks to the dinos who appear random.

The game promises a Return to Player of around 96.7%. This may not be great for a high-roller, but that does not make the game any less inviting. If your idea of fun is entering a world full of gigantic prehistoric varieties of Dinos, the Jurassic Park will charm you.

What Jurassic Park Packs in

For a 90s kid, Jurassic Park will be an unforgettable memory. Probably, it scared and later intrigued them, but the movie was fascinating. John Williams composed the background music, and to date, we can recognize the track when it plays anywhere. The element of suspense that raged through the movie is present even in this Jurassic Park video slot game from Microgaming. Play it at NetBet casino or from one of the casinos in the list here at OLBG to get the truest feels and jitters, the movie managed to send through your body even today!